So, You’re Self-Quarantined. Now What?

With the rise of the global coronavirus pandemic, people around the world are taking precautionary steps to slow down the spread of the virus, leading to millions of people stuck inside with family members and significant others. So what’s there to do? One of the easiest things to do right now with your significant other is kick up your feet, snuggle together (of course after washing your hands), and do some binge watching on some streaming networks. If you don’t have an acco

We Need to Start #CoronaWRIMO

I think we are all coming to the point where we are starting to accept that we may be indoors for a really long time. With our families. In very tight quarters. We will need something to inspire and/or distract us, so I think it’s time to start #CoronaWRIMO – the Coronavirus Writing Month where authors are challenged to write a 50,000 word novel in 30 days while we isolate ourselves to heal. There’s already a Twitter #hashtag, but it would be great if the people from Nationa

The Ripped Bodice, the country’s first all-romance bookstore (located in Los Angeles) has published its fourth annual diversity in romance report, and the news is still pretty dismal. Sisters Bea and Leah Koch surveyed 18 publishers of romance and only one had improved the number of books written by Authors of Color this past year. The report focuses on the race of the authors being published by both the Big Five publishing companies and independent romance publishers, but do

Thursday, March 12th, was the day where everything you were going to see or do was canceled. No hockey season, basketball, soccer or baseball, no Broadway and Off-Broadway theater, no Disneyworld, Disneyland or Universal Studios. All closed. New York’s Governor decreed that all gatherings of more than 500 people should be canceled. In California and Washington State, the cut off number is 250. So some of our favorite romance events have been postponed as a result. The Book

Once again a small, itsy bitsy piece of LGBTQ+ representation is being criticized and, consequently, banned from particular markets. This time it’s Pixar’s latest film Onward, banned in four Middle Eastern countries, for a miniscule scene where nothing is actually shown. In one scene, as The Mary Sue explained, “Lena Waithe’s character, Officer Specter, mentions her girlfriend’s child when Barley (Chris Pratt) and Ian (Tom Holland) are trying to trick the cops and get out of

It’s that time of the year again, folks. LAMBDA has announced their finalists yesterday for the 2020 year award ceremony in 24 different categories. Each book Is judged by over 60 judges, literary professionals who “spent countless hours considering a record-breaking number of submissions. As LAMDA notes, “For many LGBTQ authors, the Lammys were among the first awards to record their work,” which is important, considering many of the bigger publishing companies are not puttin

Guest Post From Afar – The Many Flavors of Sci-Fi Romance

This column was published first in the Roswell Daily Record (www.rdrnews.com), Feb. 23, 2020 I’ve never been to Roswell in terms of geography but in terms of what Roswell represents to me — an all-American city with a generous side helping of mystery tinged with science-fiction and infinite possibilities — I feel right at home. First and foremost, I’m a science-fiction author, with an emphasis on the romance elements, but lots of action and adventure, as well. I often say my

A Proposal at the Galaxy’s Edge

It seems love finds itself even in the smallest of places, even in a galaxy far, far away. In a touching video circulating the internet, long time Star Wars fan Lana decided to propose to her boyfriend in the Galaxy’s Edge attraction in DisneyWorld in front of the Millennium Falcon. Lana, ever the careful planner, waited for a light-saber meet up—an informal event where Star Wars fans gather in front of the Millennium Falcon at night, cutting their way through the darkness wi

Mike Bloomberg’s Daughter is a YA Author

She’s one of us! And she love horses. Actually Wikipedia describes her as a professional equestrian, so it’s no surprise that she writes young adult horse-loving romances Thirty-seven year-old Georgina Bloomberg is Mike Bloomberg’s youngest daughter and the owner of the equestrian team New York Empire, as well as a professional equestrian, and the co-author of four young adult novels about the girls of a horse racing team. In a 2011 article in the New York Times, the paper ma 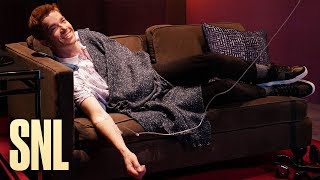 Saturday Night Live’s last performance had taped a satire of the “love at first sight” reality TV shows with “Love Is Blind: Quarantine Edition,” but the darkly humorous sketch was cut for time, according to The Wrap. In this SNL parody, Hazmat-wearing Alex Moffat and Melissa Villasenor play Nick and Vanessa Lachey, the hosts of a popular Netflix dating show where singles get engaged without ever meeting face to face. Three couples are featured. An announcer voice-over says,

After Billy Porter’s recently stunning red carpet looks, most of which have been wickedly gorgeous gowns, the Internet couldn’t help compare him to Cinderella’s fairy godmother. And it got people thinking, what if Billy Porter played the fairy godmother in a live-action adaptation of Cinderella? And while the news was released to the public back in October regarding the casting of Sony’s Cinderella, Porter recently revealed in an interview with CBSNews that he will be playing

Featured Katy Perry and Orlando Bloom A ray of sunshine in all the gloom and doom. We just got word after midnight that pop singer Katy Perry, 36, and actor Orlando Bloom, 43, who have been together for three years, are expecting their first child. This news was made public through the release of Perry’s newest video for the song “Never Worn White” in which her baby bump can be seen! Her publicist also confirmed her pregnancy. The lyrics to the song also tell the story about

ABC just cast Gina Torres as one of the lead roles in the pilot for The Brides, as well as Katherine Reis, Sophia Tatum, and Chris Mason. The new vampire soap opera pilot is being developed from the team behind “Riverdale.” Variety describes the show as a contemporary reimagining of Dracula with three female leads that will do anything to maintain their wealth, prestige, legacy, nontraditional family and immortality. Katherine Reis will play Lily Stevens, the youngest Bride o

Cereal lovers rejoice! IHOP has announced yesterday they will be rolling out with their brand new cereal pancake made with a unique variety of cereals and different flavors. Each order comes with two buttermilk pancakes, fluffy enough and big enough to contain a delicious bite every time. Each order, however, will be made with a different cereal and different toppings. The Cinnamon Toast Crunch™ pancakes will be made with two buttermilk pancakes topped with cinnamon spread, C

Picture taken from @amamaknox's instagram Amanda Knox, who spent four years in an Italian prison after being charged with the murder of her college roommate, married Christopher Robinson on leap year day in a space-themed wedding at the Elks Lodge in Burien, Washington. About 100 guests attended the renaissance and space-themed wedding and were encouraged to wear either medieval attire or Star Wars garb. E News reported that the bride wore a combination of both themes, with h
1
2
3