If you’ve burned through Netflix’s one-of-kind documentary Tiger King in two or three days (do you know anyone who hasn’t?), and are caught up on your favorite shows, it might be time to sign up for one of the free streaming trials (here’s a list, https://slickdeals.net/article/list/best-free-trials-popular-online-video-streaming-services/) that ranges in everything from Disney Plus, Hulu, Netflix and Prime to vast libraries of old films. But what to watch? Your tastes may ha

While the U.S. takes small steps in preventing the coronavirus through social distancing, it seems that many who are not living in the epicenter of the coronavirus, places like New York, California, and New Jersey, are not taking preventive measures seriously. It seems many are downplaying the severity of how contagious the disease really is. Kevin Bacon an actor known for the hilarious theory of “Six Degrees of Kevin Bacon” has come up with a thoughtful way to show his milli

Lesbian Couple Get Married on NYC Street During Quarantine

Like a scene out of a contemporary retelling of West Side Story, two Washington Heights lesbians had a curbside wedding ceremony as the officiator performed the vows from a fourth floor window and a handful of fellow New Yorkers watched from a distance. It was all, thankfully, captured on camera, and later on posted in social media. The backstory to this amazing wedding spectacle is a little heart-breaking. According to New York Magazine, Reilley Jennings and Amanda Wheeler w

With everyone self-quarantined, numerous industries have opened up to the public through digital streaming to enjoy things from the comfort of their homes. Musicians are going live on social media, drag queens continue to perform, and the animals of zoos came out to play. That’s right, zoo’s are setting up cameras so lovers of aquariums and zoos can watch all their favorite critters right from the couch, while also practicing safe, social-distancing. One such zoo, the Dallas

Bindi Irwin Gets Married in a Zoo

The daughter of beloved Australian zoologist Steve Irwin, nicknamed “The Crocodile Hunter” (who was killed by a sting ray in 2006) married in an intimate private ceremony in her grandparents’ private zoo in Queensland on March 23rd. Despite the fact that she was only 7 when her father died, 21 year-old Bindi has followed in her father’s footsteps sharing his passion for animals and has become a wildlife expert. The couple married in the gardens of Australia Zoo in Queensland

Drag Queen Story Time in the Time of Corona

Missing the late night famous drag shows of New York, ordering vodka crans or whiskey sours? Need some of that wild energy? No need to miss out, because drag queens are moving online. Okay, the move to digital is not exactly lip syncing and wigs, but it’s a bit of a calmer energy necessary for quarantine. Drag queen Nina West has moved her storytime event to Instagram, where she entertains children reading children’s stories. In her last event she read RED: A Crayon Story by

In the midst of the Coronavirus outbreak in the United States, the Romance Writers of America (RWA) held online elections for a completely new board of directors, including a new president, after the chaotic winter avalanche of bad decisions that resulted in almost all its board members either resigning voluntarily or by force over issues of racism and poor management. The results were announced on March 24th. Best-selling author Alyssa Day, a former trial lawyer and the auth

Twitter Supposes Sex and the City Characters during COVID-19

I love Twitter. It helps me find people who see this crazy world in ways that make me laugh, and I REALLY need that right now. So, a big shout out to Danielle Sepulvere (@ellsep), a comedy writer for Upright Citizens Brigade (UCB) who brought us an imagined scene of the four female characters from the 90’s classic TV show Sex in the City as they discuss their lives around that familiar lunch counter. Fan Fiction at it’s finest! Somone else on Twitter wrote “now, do The Offic

Marvel Pushes Inclusivity and Results are Not Well-Received

Marvel has decided, very foolishly I must say, to assemble a team of remarkable, diverse super heroes who fight bad guys and social injustices. Sounds like a pretty cool team? Well, if you’re familiar with Marvel’s version of inclusion, you already know this is not what it seems. In an attempt to create a new version of the superhero team The New Warriors. The new comics follow the old cast of The New Warriors, consisting of Night Thrasher, Firestar, Rage, Speedball, Namorita

Smashwords, one of the leading distributors of indie authors’ ebooks, has put together a month-long site-wide sale of ebooks, ranging in price from free all the way up to 60% off. The sale is titled Authors Give Back and runs through April 20th. . Mark Coker, founder of Smashwords, wrote that he expected the site to host 30,000 deep discounted titles as well as 80,000 free books in this ground-breaking sale. According to the Smashwords blog, the sale came about “to help reade

Trying really hard to find the silver lining in every day, and was kind of thrilled to see that the Hallmark Channel will air some of their most popular Christmas movies in a marathon this weekend, from Friday March 20th through Sunday, March 22nd. Hallmark Channel is calling this weekend-long screening the "We Need A Little Christmas" Marathon, which will start with A Christmas Detour and will run all weekend concluding with Christmas in Rome on Sunday at 6:00 p.m. All of yo 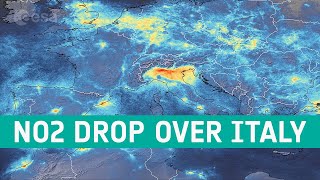 So There is Some Good News

As a result of the stopping of human activity in developed countries, the European Space Agency has been able to show how nitrogen dioxide has decreased across the planet in time-delayed photography from space. While this of course won’t solve the impending climate change crisis, we are giving Mother Earth a bit of a break, and the planet appears to be thankful. In Venice, Italy, the complete lack of gondolas in the canals has allowed fish to return and literally swarm the w

In the midst of the chaos that is the coronavirus pandemic, families have been forced to say goodbye to loved ones for some time in fear of infecting those who may be vulnerable. That includes family members who may have a medical worker in the family, people who are immunocompromised, and the elderly. But for one man, Bob from Vernon, Connecticut, coronavirus didn’t stop him from celebrating his 67th wedding anniversary outside his wife’s nursing home in Stafford Springs on

So we’re all in home/work isolation which means we’re trying really hard to pay attention to our work, but also checking news and social media every five minutes. But more than anything else, we want to be distracted and also feel that we are all in this together. And it seems that some of our favorite celebrities have anticipated those needs Today I found a delightful reading of Shel Silverstein’s The Giving Tree by the actor Josh Gad who reads it as though he was reading i

While countries including France, Spain and Italy move aggressively to slow down the progression of the coronavirus pandemic, or flattening the curve as officials are saying, the United States is moving at iceberg speed. Despite Donald Trump’s proclamation that “everything is running smoothly” and that they have everything under control, many members of government have come forward to call Trump out for his lack of poor management. Senate Appropriations Committee Chairman Ric
1
23